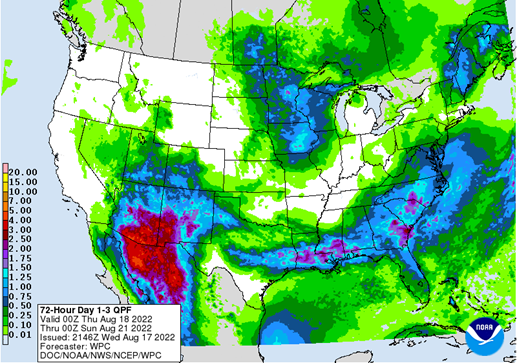 VINIMEX are pleased to update market news on August 18, 2022 as below

Weather: The 8-to-14-day forecast from NOAA predicts seasonably cool, wet weather for the majority of the Midwest between August 24 and August 30. Some parts of the Corn Belt will receive no measurable moisture between Thursday and Sunday. During this time, large parts of Iowa, Minnesota, and Wisconsin could see another 1 or more.

General: Grain prices are mixed following some erratic technical maneuvering on Wednesday, as traders focused on weather forecasts and demand trends. Corn and soybeans suffered significant losses earlier this week, prompting some bargain hunting today. Wheat prices took another hit, with most contracts falling by at least 2% following a round of technical selling.

SOYBEANThe weekly Export Sales report, which will be released on Thursday, is expected to show 100,000 MT of old crop reductions to sales of 300,000 MT in the week ending August 11. New crop bookings are expected to range between 300,000 and 650,000 MT. Across both marketing years, meal sales range between 150,000 and 650,000. Bean oil is estimated to be worth 0-25,000 MT. Following a delay from the original schedule of the 12th, FSA data showing initial planted acres and prevent plant numbers will be released on Monday afternoon.

CORNAccording to EIA data, production fell to 983,000 barrels per day in the week ending August 12. This represented a 39,000 bpd decrease from the previous week. Despite the reduction in output, stocks increased by 190,000 barrels to 23.446 million barrels, implying lower demand. Traders anticipate USDA to report 0-400,000 MT in old crop sales ahead of Thursday’s Export Sales report. A new crop of 300,000-700,000 MT is expected. The Buenos Aires Grain Exchange anticipates 7.5 million hectares (18.5 million acres) of Argentine corn acreage in 22/23, down from 7.7 million hectares (19 million acres) the previous year.

WHEATAccording to Reuters polled analysts, the FAS will report wheat export sales ranging from 250,000 to 650,000 MT in the week ending 8/11. 359,165 MT were sold last week. On Wednesday, India’s agriculture ministry increased wheat production by 0.43 MMT to 106.84 MMT. In comparison, the USDA has 103 MMT. An additional four vessels have left Ukrainian ports, bringing the total since August 1st to 24. 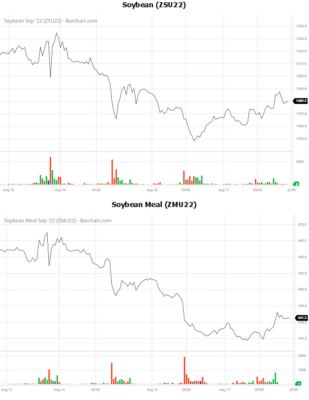 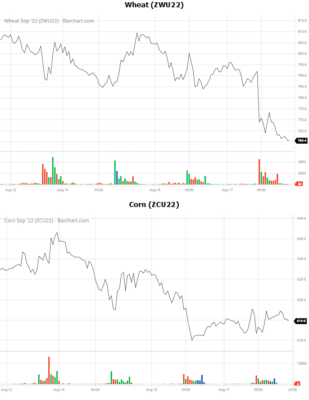