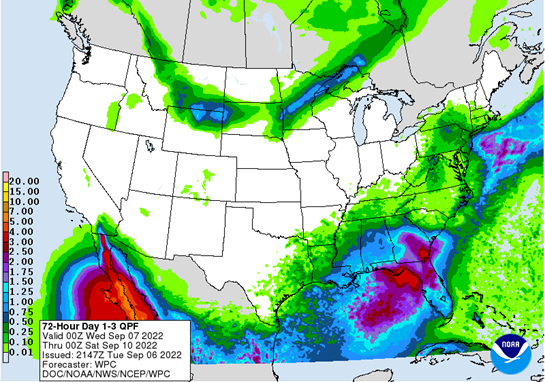 VINIMEX are pleased to update market news on September 07, 2022 as below

Weather: Between Wednesday and Saturday, there will be some rain in some areas of the Midwest, but there will not be much moisture in the Corn Belt. The Midwest will experience near-normal to slightly dry precipitation totals between September 13 and September 19, according to NOAA’s updated 8-to-14-day outlook. Most of the United States is forecast to see temperatures above average.

General: U.S. grain prices were mixed on Tuesday as traders resumed a holiday-shortened week. Corn prices showed the most upside, with prices rising more than 1.5%. Wheat prices also made moderate inroads today. Soybeans failed to follow suit, with Argentina offering an improved exchange rate to farmers – a move that is likely to boost short-term sales.
SOYBEANSFor the week ending September 1, the top five countries receiving soybean exports were China, Mexico, Algeria, Japan, and Costa Rica. Inspections of soybean exports fell short of trade predictions, which ranged from 14.7 million to 29.4 million bushels. With 56% of the crop in good to outstanding condition as of Sunday, analysts anticipate another one-point decrease in soybean quality ratings, according to the USDA’s crop progress report. Individual trade predictions range from 55% to 57%. Preliminary volume projections called for 115,424 contracts, up 28% over Friday’s final tally of 90,515.

CORNOn the low end of trade estimates, corn export inspections for the week ending September 1 decreased moderately to 20.4 million bushels. That was on the low end of trade estimates, which ranged between 19.7 million and 32.5 million bushels. In the week that ended September 1, the top five corn import destinations were Mexico, China, Japan, Ireland, and Costa Rica. USDA is expected to show a slight decline in the corn ratings for the week ending September 4, with 53% of crops in good-to-excellent condition. Individual trade guesses range from 52% to 53%, as USDA releases its weekly crop progress report this afternoon. Prior to Friday’s final total of 132,419 contracts, preliminary volume projections were for 148,338 contracts.

WHEATWheat export inspections faded moderately lower, reaching 17.6 million bushels for the week ending September 1. Cumulative totals for the 2022/23 marketing year are trending moderately below last year’s pace. Mexico, South Korea, Japan, Philippines and Ecuador were the top five destinations. By September 4, the spring wheat harvest is anticipated to be 67% complete, up from 50% a week earlier. With an estimated 4% of the 2022–23 crop already planted, analysts also anticipate seeing the USDA’s first winter wheat planting data. Preliminary volume projections called for 45,094 CBOT contracts, which is a small decrease from Friday’s final tally of 49,089 contracts. 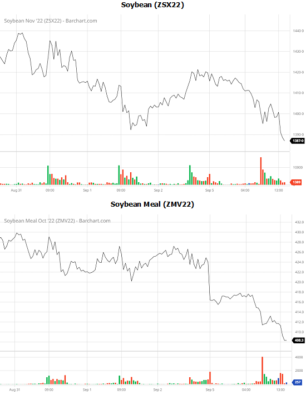 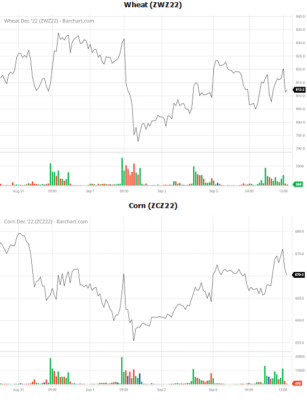