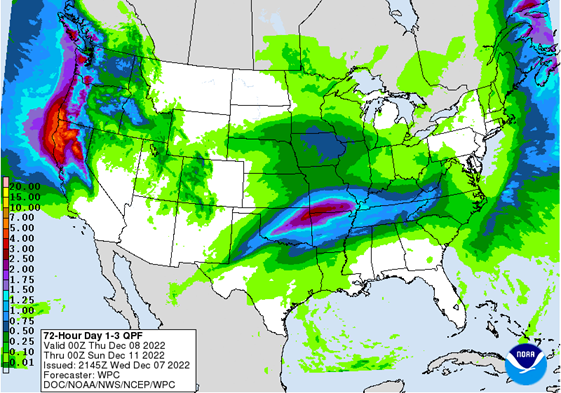 VINIMEX are pleased to update market news on December 08, 2022 as below

Weather: Between Thursday and Monday, most of the Midwest and Plains will see at least some measurable rain and/or snow. The new NOAA 8-to-14-day forecast predicts more seasonably wet weather for the central Unitedo States between December 14 and December 20. Temperatures that are lower than normal are also possible during this time.

General:  Wheat, soybean, and corn prices all increased on Wednesday as traders assessed the most recent supply and demand fundamentals. Some contracts rose by as much as 3%, while others rose by as little as 0.5%. SOYBEANSTraders anticipate that the weekly Export Sales report for the week ending 12/1 will show between 0.6 and 1.2 MMT of old crop sales. Estimates for the new crop are expected to be less than 250k MT. Soymeal sales are expected to range between 150k and 350k MT, according to traders. According to pre-report estimates for the December WASDE, soybean carryout will average 233.3 mbu. This represents a 13.3 mbu increase over the November estimate. The published ideas range in size from 200 mbu to 296 mbu. The average estimate for the Brazilian soy crop is 152.5 MMT, which, if realized, would be 500k MT higher than the USDA’s November forecast. The entire range is UNCH to 155.1 MMT. Argentina is expected to reduce 700,000 MT to 48.8MMT.

The weekly EIA ethanol production report for the week ending 12/2 showed an average of 1.077 million barrels per day. This was an increase of 59,000 bpd from the previous week. Stocks of ethanol rose to 23.3 million from 22.93 million the previous week. The trade anticipates a US corn carryout of between 1.170 and 1.350 bbu ahead of Friday’s USDA reports. Those polled were leaning toward a 56 mbu increase over the November WASDE. Pre-report surveys predict little change in global ending stocks, with an average estimate of 301 MMT, up only 200,000 from November.

WHEATAnalysts polled ahead of the monthly WASDE report estimate US wheat carryout at 581.3 mbu on average. If realized, that would represent a 10.3 mbu increase over November. The entire range is between 551 and 602 mbu. Global stock ideas range from 262.5 to 276 MMT, with an average of 268 MMT. That is only 200,000 MT more than last month. 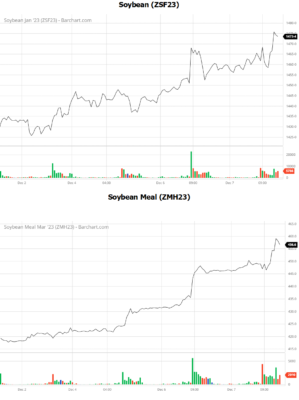 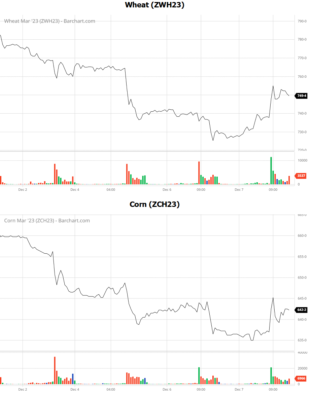