Vinimex are pleased to update market news on December 15, 2022 as below

Weather: According to the NOAA, most areas east of the Mississippi River, as well as the upper Midwest and Northern Plains, will receive at least some measurable moisture between Thursday and Sunday. The new NOAA 8-to-14-day forecast predicts a return to seasonably dry weather for the eastern Corn Belt between December 21 and December 27, with significantly lower-than-normal temperatures expected in the central United States. 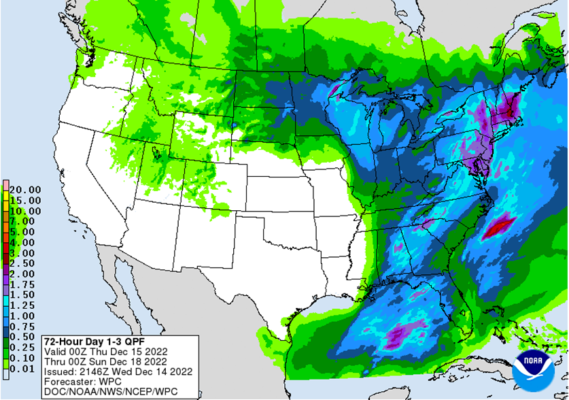 General: Grain prices are down as traders prepare for the next round of export data, and mull over the latest news from the Federal Reserve.

Soybean prices tested modest gains on Wednesday as traders have generally bullish expectations for tomorrow morning’s export report from USDA. Analysts are expecting another robust round of soybean sales when USDA releases its next report Thursday morning. Analysts also think USDA will show soymeal sales ranging between 150,000 and 370,000 metric tons, plus up to 5,000 MT of soyoil sales.

Corn prices eased off an 11-day high captured on Tuesday following some technical selling. Prices have generally struggled to find much positive traction after hitting a seasonal peak in early October. Ethanol production for the week ending December 9 saw a moderate decline but still posted a solid daily average of 1.061 million barrels.

Wheat prices faded lower on Wednesday as a winter storm is pushing much-needed moisture onto the Plains this week. French farm office FranceAgriMer raised its estimates for 2022/23 wheat exports outside of the European Union. Tunisia issued an international tender to purchase 3.7 million bushels of durum wheat from optional origins. Iraq issued a tender for milling wheat from the United States, Canada or Australia. 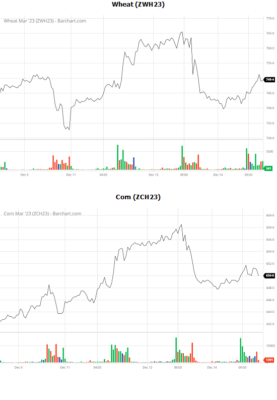 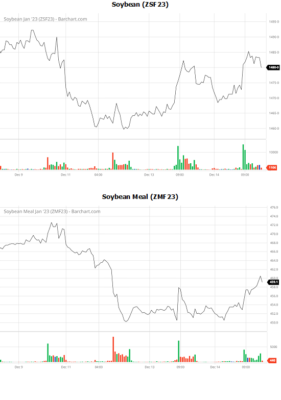