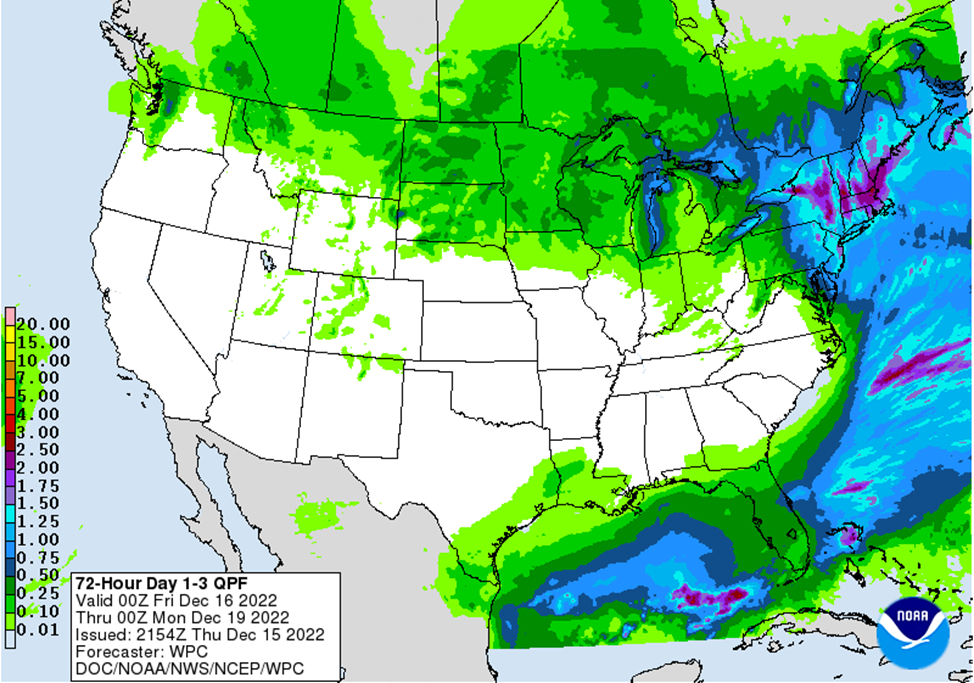 Vinimex are pleased to update market news on December 16, 2022 as below

Weather: Between December 22 and December 28, forecasters predict more seasonably wet weather for the Northern Plains and upper Midwest. Temperatures in the central United States are expected to be much colder than normal from Friday to Christmas Day. Southern areas should remain relatively dry during this time.

Soybean prices fell more than 0.5% today as recession fears and lower energy prices prompted some technical selling. For the week ending December 8, soybean export sales increased to 108.2 million bushels. Soybean exports were also strong, totaling 67.8 million bushels. The top five destinations were China, Mexico, South Korea, Bangladesh, and Japan. The Rosario Grains Exchange in Argentina reports that its expectations for corn and soybean production in 2022/23 remain unchanged from previous projections of 2.205 billion and 1.764 billion bushels, respectively. However, soybean plantings are “threatened by a lack of water and extremely high temperatures that have been ongoing since November,” according to the exchange.

Corn prices rose 0.5% after a flash sale to Mexico and a healthy dose of USDA export data triggered a round of technical buying on Thursday. Corn basis bids at three Midwestern processors were mixed on Thursday, moving up to five cents in either direction. Bids were steady elsewhere in the central United States today. The USDA reported that private exporters sold 4.0 million bushels of corn for delivery to Mexico during the 2022/23 marketing year, which began on September 1. Last week’s corn export sales were strong, totaling 37.8 million bushels. This corresponded to the upper end of trade estimates, which ranged between 23.6 million and 37.8 million bushels. Last week, corn export shipments totaled 23.2 million bushels. The top five destinations were China, Mexico, Honduras, Japan, and Costa Rica.

After some erratic technical maneuvering on Thursday, wheat prices were inconsistent. Prices for spring wheat slid marginally lower while those for winter wheat increased by 1%. 17.2 million bushels of wheat were exported last week, a healthy amount. That exceeded every analyst’s prediction, which varied from 5.5 million to 13.6 million bushels. 9.4 million bushels of wheat were exported last week. The top five locations were Japan, Mexico, South Korea, Nigeria, and Guatemala. Due to the severe drought, the Rosario Grains Exchange lowered its projections for Argentina’s 2022–2023 wheat production by 3% to 422.6 million bushels. In a routine tender that ended earlier today, Japan as anticipated bought 5.7 million bushels of food-grade wheat from the United States, Canada, and Australia. 43% of the total came from the United States. Beginning around the middle of January, the grain will be shipped. 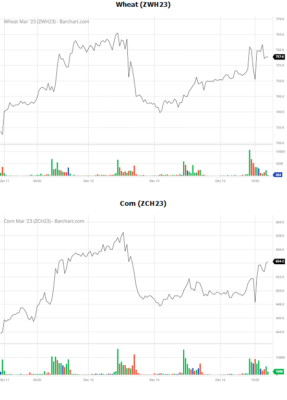 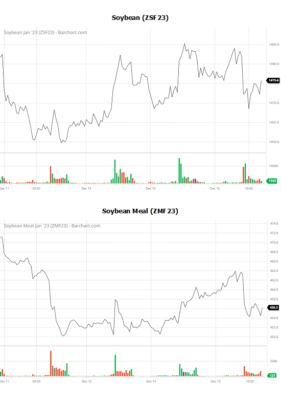