Admin - 27/06/2019
For the first time, Laos has confirmed African Swine Fever in the country. In a report to the World Organization for Animal Health (OIE), the country stated that a cluster of 7 villages were affected in the south of the country.

According to the OIE, all villages can be found in the province Saravane, right in the middle between the borders with Vietnam in the west and Thailand in the east. The largest of the villages had 788 pigs, of which 375 had died of the virus; the smallest had 82 pigs of which 34 had died. 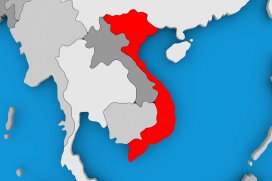 ASF getting closer to Thailand

The outbreaks in Laos mean that the virus is approaching the border with Thailand – ASF is now at 67 km in a straight line. Thailand has a well-developed pig industry, and the country is hoping to keep the virus out at any cost.

Most probably, the virus must have travelled into the country from Vietnam, as ASFwas already confirmed in both provinces bordering Saravane, being Thua Thien-Hue (as from March) and Quang Tri (as from April). The distance of the nearest outbreak to the border with Vietnam is 65 km in a straight line.

The outbreaks in Laos have led both neighbouring countries China and Thailandboth to announce that their borders will be closed for pig and pigmeat imports from Laos. According to news agency Reuters, China will also increase quarantine inspection of packages and luggage.

In the meantime, Vietnam is continuing to fight its own fight against ASF. According to the latest figures by the World Organization for Animal Health (OIE), the number of culled pigs due to ASF has now reached 2.7 million.  Officially, the virus has been reported by 58 of the 63 provinces in the country.

News agency Reuters reported that it spoke to a Vietnamese senior official who had said that it was ‘only a matter of time’ before ASF would have spread to all 63 provinces.

Reuters also talked to Can Van Luc, an economist with the Bank for Investment and Development of Vietnam in Hanoi. In his view, the outbreak has not had a significant impact on the economy yet. He said: “The price of pork may rise a bit towards the end of the year, but I don’t think it will put any significant upward pressure on inflation.”

The Philippines Department of Agriculture and the country’s agriculture industry stakeholders have decided to postpone the show Livestock & Aquaculture Philippines to May 28-30, 2020. It was planned for June 26-28, 2019. The decision is related to the growing concerns of ASF and at the request of industry leaders to prevent the disease from spreading.